Survival of the fittest or sexiest? (#2) 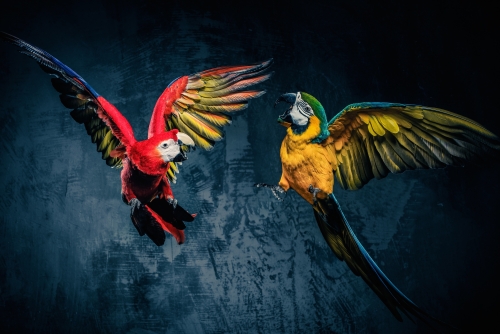 The #DataFood Start Up festival doesn't look like a festival to me, but more like a survival. And a survival it is in the urban jungle of Den Bosch.

Talking about the jungle. In 1859 Charles Darwin wrote a book about the evolution theory. He found out that ‘’It’s not the strongest that survives, nor the most intelligent. But the one most responsive to change!’’ In normal people words this book was called ‘’The survival of the fittest’’. But not many people know that in 1872 – 20 years later - the same Charles Darwin came with an other theory.

How could it be that in the jungle the parrot, the parakeet and the canary and the most colourfull birds survive? It's against all rules in nature. They had no camouflage but were colourfull. But also against his own rules in the jungle theory that the most adaptive to change could survive. Darwin found out that you can survive by being the most adaptable OR… or being the most bright and colourfull. And that was his second junglebook which no one knows: ‘’The survival of the sexiest’’: The parrot and the parakeet survive by being sexy and thereby reproductive and attractive. It’s about sexual selection. ‘’Chose me. Chose me. Chose me.’’ That’s where Marketing started. Survival of the Sexiest. Marketing. Or Mark A Thing!

Today we’re looking for new perspectives and new combinations. Creativity and curiosity are core skills in the 21th century. ,,Neue combinationen’’ sagt der Deutcher. The easiest way to accelerate in innovation is a New Combination in data x agri x food. If we look at the future from old perspectives, we will miss this future totally. We need new perspectives. We need to create a world wide community who’s gonna do it. Comm-Unity that’s a nice word; Unity in a commune. This is a call to action!

The future is in a hurry, we can not live on the credit card from our children.

Roger: ‘’Den Bosch will be hip and happening in applied digital data. If we want to be that digital capital, we have to transform from Agrifoodcapital to human capital in data ánd agri food. We have to connect young talents and young people with start ups and corporates. Most energy in the theme agro food goes to efficiency, scale (up), and lower costprice… BUT… we want also digitalization to contribute to a healthy soil, clean water and beautifull landscape; DATA CAN BE MEANINGFULL. Entrepreneurship is 90 % transpiration and 10 % inspiration.’’